Hello to all my sisters and honorary sisters in equality!

My name is Baroness Honoraria All-Kneel.

Please do not applaud yet.

Today I want to open an important new forum in the fight for equality. FemiFist is an exciting opportunity to offer the world the benefit of our wisdom and a wonderful new tool in extolling the natural superiority of rich white women over all other life forms.

What is equality?
As I used to say when I was lecturing at the exclusive women-only Bigets College of Oxbridge, equality is for everyone.

And that is why I have chosen to use the historic opportunity afforded by the opening of FemiFist to announce that the all-female panel of our Equality For Women Only Rights Committee (EFWORC) has reluctantly agreed to mention black people in our ground-breaking initiative to get more women playing cricket. 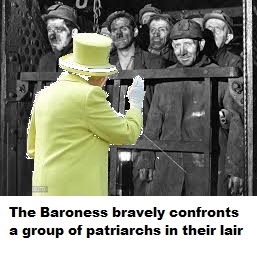 After our budget was slashed last year by the patriarchy, we were faced with difficult choices. With so much male-originated evil in the world, it was an almost impossible task to choose between the many worthy causes needing our attention. But above all of them, one issue stood out like a running sore, an historical injustice of such monstrous proportions that it could no longer be tolerated.

I speak of course of the brutal sexism of women’s unequal access to cricketing facilities.

Only yesterday, I was tortured by the issue as I strolled with Lady Tokena Black-Woman arm in arm through Hoxton, brushing aside the outstretched hands of the inconsiderate homeless men who dared to raise their begging bowls to within 6 feet of our lady-parts. After minutes of deep thought, the answer came to me in that intuitive, quintessentially female way that no man can ever experience;

“Of course, Lady Tokena. We should spend all our grant money this year on a huge advertising campaign designed to get more girls to play cricket.”

Lady Tokena was temporarily distracted by an inconsiderate male-rapist builder who had fallen off a gangplank and was screaming something about broken legs.

“Man up and pay your taxes”, she shouted, a proud and unconquerable female refusing to be silenced by the oppressive patriarchy. What a pity she is black, I thought as I found myself almost admiring her. Finally, she managed a response to my wonderful idea.

“But Lady All-Kneel, that is a brilliant idea”

“But how will we convince the patriarchy to release their ancient grip on this most vital of avenues towards true equality?” she whined.

Honestly, sometimes I despair of our coloured cousins! But I decided to humour her. 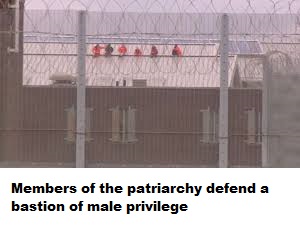 “It will not be easy,” I mused. “On our side we have only the Minister for Women, a few hundred University Gender Equality departments staffed solely by women, the UN Women’s Agency, and a thousand-year old culture obliging men to provide women with whatever we demand. Oh, and the media too.”

I paused, deep in thought, as another father threw himself from the roof of the nearby family courts (how typical of a male to attempt to hijack the equality debate!)

“I know, we will say that it is to encourage more ethnic minorities into sport, too!”

“Yes, yes, all those ethnic minorities who are so under-represented in sport. How wonderful, Lady Honoraria. Your feminine wisdom will smash the patriarchy yet!”

I smiled a knowing smile, as only a woman can.

The BBC is to launch a major 36-part series aimed at showcasing the stick-fetching skills of cats.

Sticks will be thrown to show that cats are just as good – if not better – than their canine counterparts at this traditionally dog-dominated activity. 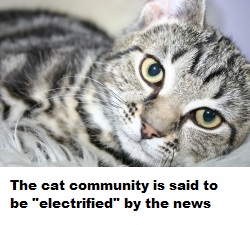 “Marks will be awarded not simply for fetching the stick, but for the care shown to the other contestants and the environment, for turning up and for looking nice as well”, a BBC spokeswoman explained.

“Stick throwers will be asked to provide justification for why the stick should be returned, and required to submit their thoughts on the historical injustice suffered by cats denied equal access to sticks for centuries. The application will be considers by an international jury of cat-loving celebrities including Anita Sarkeesian, Julie Bindel and Hanna Rosin, with a British perspective provided by Harriet Harman.”

The spokeswoman bravely continued her announcement despite turning slightly purple as she hammered the lectern. 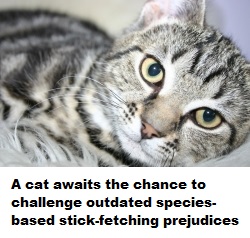 “For too long, cats have been marginalised in stick-fetching events. We aim to challenge all species-based stick-fetching prejudices. The BBC has always been at the forefront of fair-mindedness and community inclusion. The stick-fetching market is dominated by white, middle aged dogs and would benefit from alternative perspectives offered by other animals from a diverse range of backgrounds. Historically 97% of all sticks have been fetched by cats but this fact has been suppressed by the caninarchy.”

“Dogs are all worthless useless bastards with their rescuing and guiding and protecting. They shit on your carpet and run off with that bitch from number 37. They’ve had it their own way for far too long. Cats are furry and lovely and always there for you, aren’t you Ms. Tiddles? Yes you are. Yes. You. Are. Ow. Arrgh!”

We attempted to contact a dog to ask its views, but they were all said to be “outside actually doing useful stuff”.

When I was asked to c 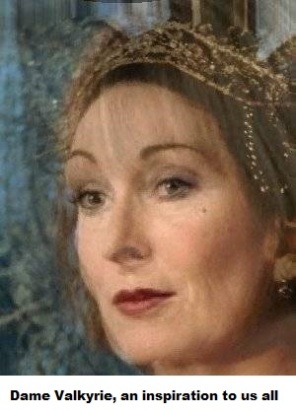 reate a National Sperm Bank for Britain, I marvelled at the wisdom of my recruiters. Who better than a woman to understand the many concerns that men have about donating sperm? I thought. And my feminine intuition immediately told me there were several huge challenges to overcome;

Sperm is traditionally hard to obtain, and the procedure involved is most unpleasant for a man. The current natural process of egg fertilisation is also inefficient and inappropriate in an age where women have busy, overworked lives. This state of affairs has resulted in a mere 3 billion pregnancies over the last 7 years.

Clearly, there was a substantial need to spend taxpayer’s money improving this process.

So I set about creating an imaginative and eye-catching campaign to recruit sperm donors. As a woman, I know that men love competitions, so I employed slogans that would appeal to this instinct, such as “Most men have pathetic sperm. Let us publicly grade yours” and “Are you man enough to donate? We will decide”. At the same time, I tirelessly toured the chat shows, sometimes even paying for my own meals, to point out how men would only need to attend the clinic one hundred times over a three year period, and how they would receive a generous payment totalling £15 for their trouble.

My next challenge was to find a suitable site for our clinic. After giving the matter much thought, I decided to establish it at the centre of Britain’s largest women’s hospital, Birmingham Harridans.

Harridans is located centrally and is easy to reach. However, as a woman, I am well aware of men’s silly reluctance to ask for directions. Only last week, I had to correct my chauffeur after he took a wrong turning and tried to drive us both into a brick wall at high speed! So I made sure to place very obvious signs on all the roads to the clinic.

For example, on the slip road of the A85819 I erected a big sign saying “Only masturbators exit at this junction.” When potential donors arrive at Harridans they are met with a huge flashing neon sign declaring “This way to make your sperm donation” right next to the hundreds of women in the main waiting room.

Not even a man could miss that, Dame Valkyrie, I thought, as the workmen shook their heads in admiration. 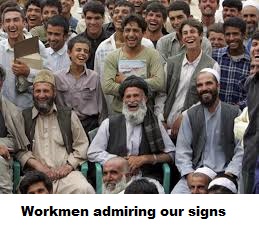 Once corralled, volunteers are led to the selection rooms to be carefully checked for any non-Aryan features. After all the gingers and blacks and Jews have been weeded out, potential donors are sensitively persuaded – in that special way that only a woman can – to sign a form acknowledging their full responsibility in perpetuity for anything we choose to do with their sperm. It’s a process that only a woman’s infallible nurturing instincts could bring into being, and I feel a touching sense of ownership to see my ladies going about their work with gusto.

I have also used my feminine intuition in designing the donation rooms. Men love to demonstrate their prowess to women and – realising that we had a ready-made female audience in the nearby waiting room – I synergised these factors, positioning the donation rooms directly facing the waiting room. Any concerns the donors might have about data protection are instantly assuaged by the soundproof clear glass panels dividing the two.

And I hope you don’t think me immodest if I say that the results of my measures over our first year have been astonishing. I think it is important for us women struggling to get by in this male-dominated world to trumpet our achievements. It encourages the go-getting female leaders of the future. 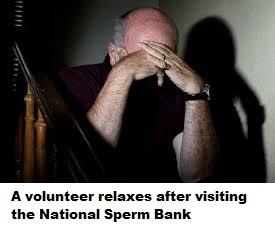 So I am proud to announce that we have managed to recruit a magnificent nine donors this year. Warm congratulations are due all round, from the Sperm Cowgirls to my hard-working deputy, Germaine Sneer, who tirelessly gives up her valuable time despite serving on thirteen other non-governmental equality bodies. When seen in terms of our £22 million yearly budget, this means each donor has cost the taxpayer a mere £2.44 million, which I think represents excellent value for money.

I would also like to thank Lady All-Kneel for her encouragement throughout our difficult first year. With more and more fearless feminists like her in positions of power, it is only a matter of time before the patriarchy is dismantled and we move forward into a world governed by the uniquely feminist values of fairness and equality.

This will of course involve the systematic eradication of all but a small number of men, who will be maintained in a comatose state as sperm donors.

I like to think I have made a small “contribution” of my own to this process!

Many of you have already asked me:

“Baroness, you have an esteemed history of spending money wisely on important causes such as the famous “Adequate Brassieres for Antarctic Explorers” initiative and the unforgettable Welsh Female Voice Choirs for More Toilet Breaks Gender Justice League. But there are so many worthy causes out there. How can my husband’s money help?”

There is no need to worry, Ladies. Happily, your husband’s donations to EFWORC are mandatory.

The tax system obliges your soon-to-be-divorced husband to give the government a large proportion of what he earns. The Government then give this money to EFWORC so we can highlight the plight of rich white women everywhere, but chiefly in nice clean European and North American countries. If you would like your husband to give more, simply ask your MP to raise the rate of tax. This will enable EFWORC to continue to support the following worthy causes which would otherwise be neglected by the patriarchy:

Keep up the pressure on the Government, ladies. Together we CAN overturn the patriarchy!

Lady All-Kneel has spent her career lecturing in female-only Universities on the subject of gender equality. She is the chairperson of EFWORC, the Equality For Women Only Rights Committee, which is appointed by the Minister for Women, where she works tirelessly in the name of equality along with the rest of the all-female panel of commissioners.

She also has a passionate interest in public accountability, using her influence on several unelected committees and her seat in the unelected House of Lords to further the cause of holding everyone else to account via innovative methods.

EFWORC is committed to openness and accountability. Please leave any complimentary feedback in the comments section below. If, on the other hand, you would like to offer some constructive criticism, please write to our complaints department at the following address, giving full details of your employer, any vulnerable family members etc:

Complaints are retrieved from the PO Box once a year. EFWORC is committed to recycling your complaint in an environmentally responsible manner.